Tulsa Public Schools and school buildings continue to be closed to prevent the continued spread of COVID-19. However, it is important to us to continue to hear public comments while ensuring the safety of our students, families, staff, and stakeholders. Therefore, public comment will be by telephone, with those telephonic comments transmitted (live) into video conference board meetings.

The Tulsa Public Schools Board of Education is an elected board of seven community leaders who serve as the governing body for Tulsa Public Schools. Board members serve four year terms, and this voluntary role requires a great deal of time, energy, care, and commitment to brighter futures for Tulsa children. We are deeply grateful for the tireless dedication of our board members.

The board is responsible for establishing policies under which the district operates while acting within the framework of state and federal laws, while meeting the unique needs and concerns of the communities they serve. As civic leaders, our board members face complex and demanding challenges and contribute hundreds of hours each year leading Tulsa Public Schools to Destination Excellence.

Board members are listed by district below, along with a map of the district boundaries, information about each of their backgrounds, and a contact email address.

A mother of five and public school advocate, Ms. Woolley has a Master’s of Science from the University of Central Oklahoma in Communication Sciences and Disorders as well as a Bachelor’s of Art in Communication from Southeastern Oklahoma State University. Stacey holds a teaching certificate in the State of Oklahoma and is a certified Speech-Language Pathologist.

Stacey and her family have lived in Tulsa for 11 years, and though they are relatively new to town, they think of it as home. Stacey and her husband Eric share the dream that all children in Tulsa would be afforded the best public education experience possible.

Born and raised on the island of Puerto Rico, Jania Wester came to the United States to attend college. She received her Bachelor’s in Education from Oral Roberts University and her Master’s in Educational Leadership from Oklahoma State University.

She was first hired as part of the founding faculty of Kendall-Whittier Elementary in Tulsa Public Schools, where she spent 14 years, the last two of those years as one of their assistant principals. She then became the first Latinx principal of Henry Zarrow International Elementary School, a Tulsa Public Schools language immersion magnet program, for four years. Her passion for bilingual education and community engagement is clearly evident in her work and in the high bar that she sets both for herself and those she has led.

She and her husband, Kirk, have been married since 1996 and they have 3 children: Sanjuana, Markos and Isabela. They have chosen to raise their children to be bilingual, bi-literate, and change agents in the poverty cycle.

Jania and her family intentionally moved into the Kendall-Whittier neighborhood in 1998, when it was known as the Red Light District and they have not only joined their neighbors in the transformation of their neighborhood but have truly embraced the beauty that comes with living in a multi-cultural and mixed income neighborhood.

Ms. Jennettie Marshall was elected to her post in April 2017. Her term will expire in February 2021.

Ms. Marshall has a strong history of serving people through her ministerial duties, funeral service duties, and volunteer work. Jennettie retired from the State of Oklahoma where she worked for the Department of Corrections and the Department of Human Services. She also served the City of Tulsa as a police and fire chaplain and was trained in emergency disaster response and hostage negotiation. In 1994, Ms. Marshall established Reclaim Inc., a program that specializes in serving as a "vehicle of change and r4edirection" for families, juveniles and adults.

Jennettie holds an associates in political science, bachelor of science in corrections, masters of science in business management, associates in applied science in funeral service, attended Phillips Theological Seminary and is completing her seminary coursework through Andersonville Theological Seminary. She is the founding pastor of Living Sanctuary Evangelistic Ministries and previously served as Senior Pastor of Snowden Chapel and Macedonia Christian Methodist Episcopal churches.

Ms. Marshall is the proud mother of three children, DeAndrae Sr., LaKesha Caraway and LaToya (deceased). She is the proud grandmother of twelve grandchildren.

As a fourth-generation East Tulsa resident, Ms. Keller attended Disney Elementary School, Foster Middle School (currently East Central Junior High School) and East Central High School. Ms. Keller graduated from the University of Tulsa with a bachelor’s degree in history and received her teaching certification from Northeastern State University. Ms. Keller also has a master's degree in history from the University of Tulsa. Ms. Keller began teaching at Owasso Ram Academy in 2006 as a history teacher. She was selected as Teacher of the Year at the Ram Academy in 2011. Ms. Keller is an active member of the Oklahoma Education Association.

John Croisant is the school board member for Tulsa Public Schools District 5. Born and raised in Tulsa, John attended Jenks Public Schools (K thru 12) and later received his degree in political science from the University of Tulsa. After completing his pre-law certificate and secondary education requirements, John decided to focus his career on education.

With more than a decade in the classroom, John has seen first hand the effects of under-funded schools on both the students and community. After completing his teacher certification, John moved to Louisiana and began his career in public schools in the New Orleans metro area. John and Deborah returned to Tulsa after Hurricane Katrina and John became a coach and teacher at Edison Preparatory. He taught 6th grade geography and was the head girls soccer coach for 12 years, before retiring in 2018 to open his own insurance agency. However, with the help of Allstate and UpliftEd John has remained involved with TPS with several grants to help students and teachers across the district. He is also a member of the Tulsa Rotary Club and the Tulsa Regional Chamber.

Education is the foundation which we build our community on.  It is time for strong leadership that is going to put education first today, to ensure the success of Tulsa tomorrow. Tulsa’s next generation of leaders and citizens are in Tulsa Public Schools right now, so let’s make sure they have the tools and opportunities to succeed.

He has lived in Tulsa more than 40 years and is a proud graduate of Edison High School.  Following high school graduation, he joined the United States Marine Corps.

During his Marine Corps service, he was stationed many places including a stint with HMM-364 (The Purple Foxes) in the Republic of South Vietnam and Okinawa). He received an honorable discharge and returned to Tulsa where he served as a Tulsa police officer, while attending the University of Tulsa where he earned his bachelor’s degree in business administration.

Subsequent educational experiences earned him a master’s degree in business administration from Southern Methodist University, a doctoral degree in education from the University of Tulsa, and an Executive Juris Doctorate from Purdue University Global. He has written several books of which one has been translated into Japanese and Portuguese and has authored several journal articles.

One of his most exciting acts of service was serving in the United States Peace Corps for two years where he was sent to Botswana, Africa. While in Botswana he was a Senior Consultant and traveled to other countries, including Lesotho and Swaziland.

Dr. Griffin is certified in Oklahoma to teach middle level social studies.  He has over 40 years of teaching experience and has taught at Texas State University – San Marcos, Wichita State University and in the virtual program at Oklahoma University.

His philosophy of education centers around learning as a life-long process, and that learning (at all ages) must be an active process and become a value of the learner. He believes learners must have the basic foundational skills taught in an environment of critical thinking before moving on to higher-order learning.

Dr. Griffin has traveled the country teaching others to take personal responsibility for their learning.  His research interest include Organizational Development, Critical Thinking, and Servant-Leader Policing.

Dr. Griffin has a 14-year old daughter, and a son who graduated from East Central High School.

She has lived in Tulsa more than 20 years. Her passion for public education is fueled by the belief that every child can learn and our community is stronger when all children have access to a quality education. Ms. Schreiber and her husband, Tony Rittenberry, have four children ranging from ages two to ten. Their school-age children are students at Tulsa Public Schools.

Suzanne has always been civically active, participating in everything from student government, leadership organizations and charitable boards to middle school mentor and homeroom mother at Grimes Elementary. She is a graduate of the University of Tulsa and the University of Tulsa Law School. She works for the Tulsa Community Foundation on a variety of community improvement projects. Prior to her position at Tulsa Community Foundation, Suzanne practiced law in the private sector and served as a federal law clerk at both the district and appellate levels. 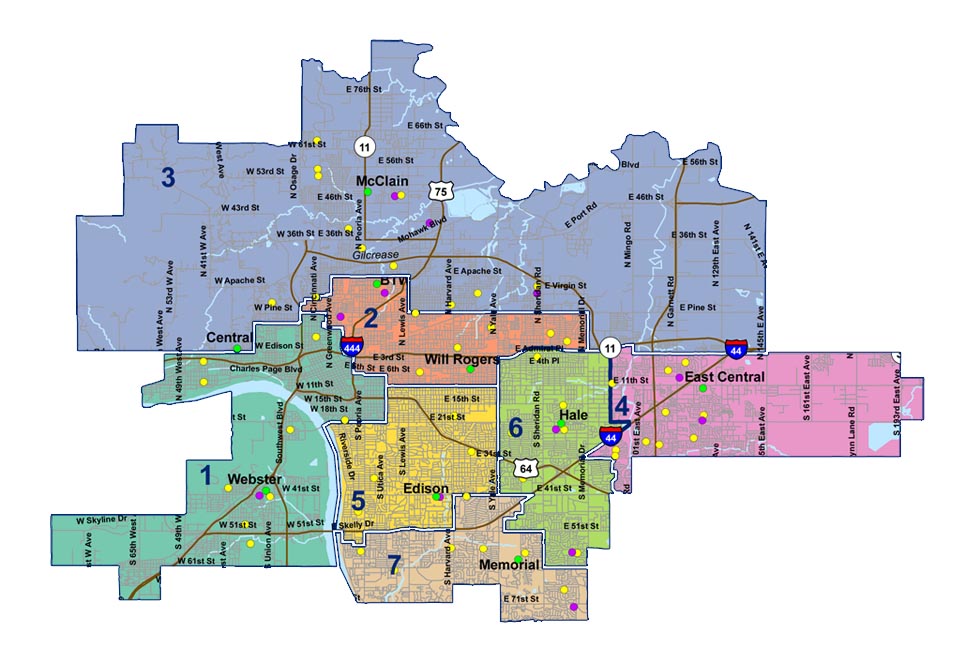 To be eligible to serve on the date of the election, a candidate for school board member must be a citizen of the United States, at least 18 years of age, a registered voter, and a resident of the State of Oklahoma and the school district for at least one year immediately preceding the election.

Elections are nonpartisan and board candidates do not indicate a political party affiliation. Candidates should be aware of financial conflict-of-interest limitations set forth in state law.

Notice of Election to Select Board Members

A total time limit of five minutes will apply to each speaker during a meeting regardless of the number of topics on which the individual requests to speak.

To avoid circumvention of these separate proceedings and to assure fairness to all parties concerned, no person will be allowed to speak regarding the following:

An issue in a pending lawsuit, complaint, or investigation filed with an outside agency, wherein the district, employee(s) or the board is a party;

An individual wishing to comment during this portion of a meeting must submit a completed request form with all supporting documents to the Clerk of the Board. Please note the additional guidelines and forms below

Request to Speak to an Item on a Regular Meeting Agenda

For further information, please contact the superintendent's office, either by telephone at 918-746-6800 or by email.